The Stourflex range of air and dirt separators provide an ideal solution to the problems of air and dirt in heating and chilled water systems – if air and dirt are not removed, system efficiency is severely reduced. Excess air in a system causes noise and oxidisation which in turn leads to the formation of dirt. A build up of dirt in the system will lead to increased pressure drops, blockages and premature failing of components.

Stourflex are pleased to be able to offer a comprehensive range of Air & Dirt Separators;

Available exclusively in the UK from Stourflex, Nonair® products use a unique patented method that removes dirt, air, sludge and solid particles from your heating and chilled water systems.

Also available from Stourflex, our JP600 wall mounting kit specifically designed to support the weight of the JP601, JP602 & JP603 when mounting on horizontal surfaces. 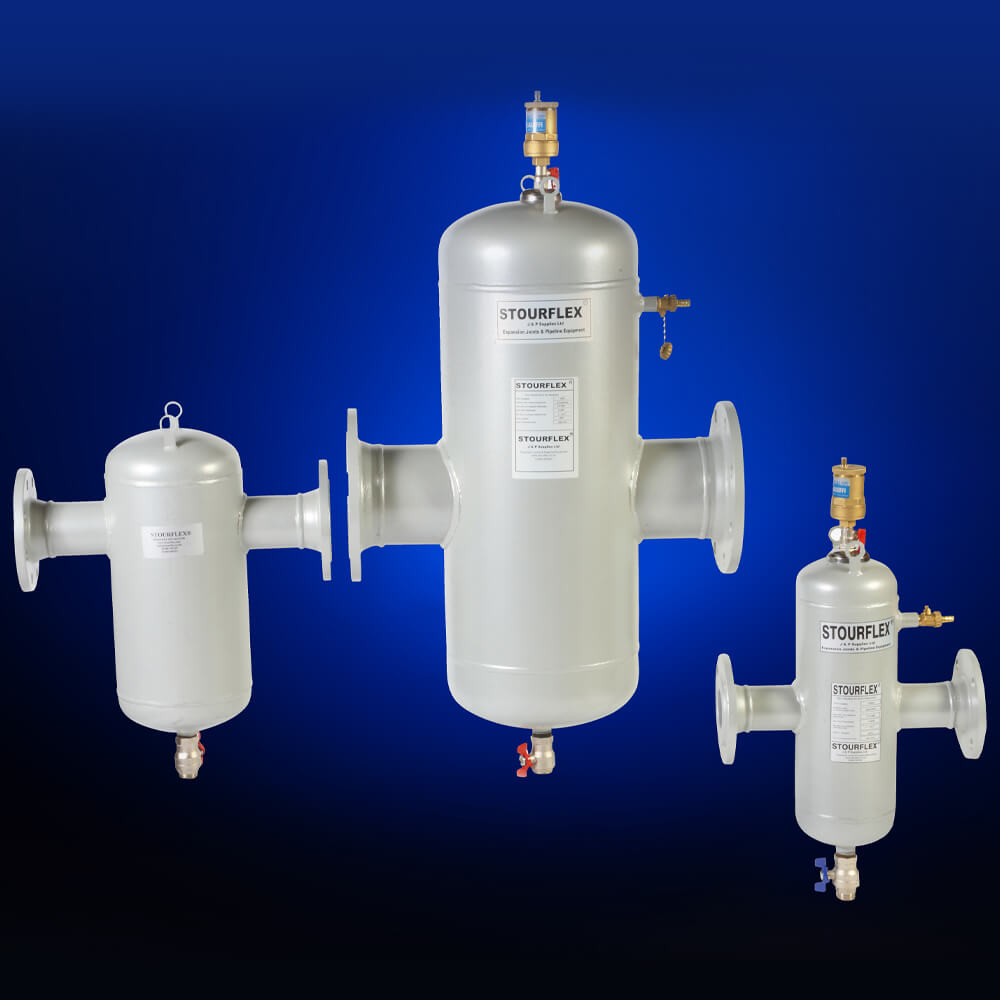 Air and Dirt Separators are designed to remove both air and dirt from circulating heating and chilled water systems and in doing so play a vital role in helping to maintain water quality and efficiency in these types of installations.

A heating or chilled water system that has a significant build-up of corrosion and sludge has to work significantly harder to distribute the water. This corrosion will significantly impact the water flow resulting in components having to operate harder than their capabilities. Increased demands on the system will lead to replacing components sooner than expected which means unplanned maintenance costs and higher energy consumption

An air and dirt separator provides a dual function by collecting and removing dissolved gases from the system water through an automatic air vent and also trapping dirt particles that can be removed through periodic flushing.

The separation occurs in the enlarged outer chamber of the air and dirt separator which is fitted with a stainless steel diffuser screen. Due to their small size and low buoyancy of microbubbles they are more difficult to capture than large visible air bubbles. The stainless steel diffuser screen provides the surface upon which microbubbles can cling and eventually fuse together to merge into larger bubbles which gain buoyancy and float to the top of the chamber where they are vented automatically.

By increasing the size of the chamber this reduces the velocity and decrease the turbulence of the water flow. This provides the opportunity for air bubbles to be separated and rise to the top of the chamber and for solid particles heavier than water to fall and be collected in the bottom of the chamber

When selecting the position to install we should be aware of what Henry’s Law states with regards to the relationship between a liquid and a gas.

These can be shown with the following examples